Learn How to Form Plurals in Spanish 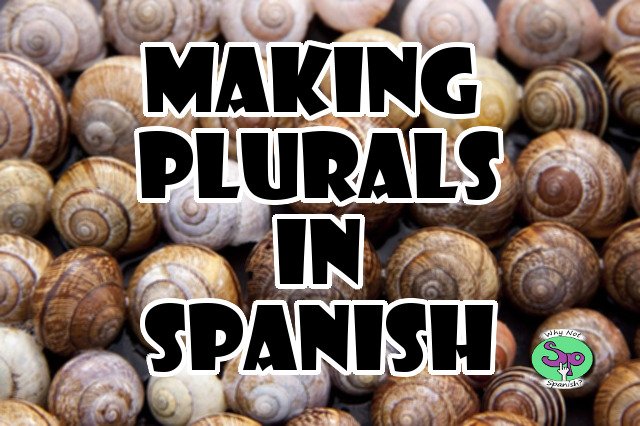 First of all we need to take into account that there needs to be a relation between article (el . la) and noun (any word that denotes an animal, person, or thing). In Spanish we use article EL or UN if we have a masculine word, and article LA or UNA if there is a feminine word. These articles also have plural forms. Find out more about articles in Spanish here!

They are: Los or unos (plural, masculine), las or unas (plural, feminine). Now that you have this part down, we’ll also learn how to make nouns in Spanish, plurals. There are three basic rules you need to learn and you can also watch them on our video.  (There are more rules but they are exceptions or very particular situations).

Plurals: What You Need to Know…

Number one: Most words in Spanish will end in S if they are plural. Add an S if the word ends in A, E, or O. Look at these examples and see the difference: la pluma- las plumas, el gallo- los gallos, un perro- unos perros, una liebre – unas liebres.

Finally, if the word happens to end in Z, change its spelling with -CES at the end. So it would look like this: El Pez – Los peces; el lápiz – los lápices; la nariz – Las narices.

As usual, in Spanish there’s always an exception to anything, so here you have them regarding plurals:

If a noun ends in -S or -X there can be two particular situations: If the noun has an accent in the last syllable (palabra aguda), you will add -ES to form its plural.

Also, if the word that ends in -S or -X, doesn’t have that accent at the end of the word, then the word will remain the same and ONLY the article will indicate if it’s plural or singular. Check this out!

Some nouns only allow a singular form:

We hope you have found this post useful and that you have clarified some doubts. Let us know if it helped you or if you have any question.

Videos For Basic Spanish Students
PrevPreviousAmerican? Not Your Nationality in Spanish.
NextApartment and House. Looking for One. Spanish QuizNext